There and Back Again: An Apprenticeship Tale 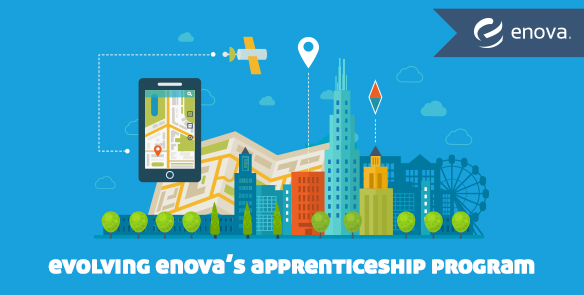 At the end of April our first two apprentices were promoted, and honestly I’m still not over how happy I am with the outcome. You’d think that in a department rapidly approaching one hundred and fifty engineers that two wouldn’t occupy so much mental space, but the truth is that Jill and Stacy are just a little larger than life. While I have no desire to labor over a chronicle — read more here and here, hear about the program on Ruby Rogues, or watch a short video here — I would like to take advantage of our perspective and reflect. Every step was a learning exercise for everyone involved, and at times I’m unsure who learned more, the apprentices or me. I’d like to share some of those things I’ve learned and experienced, and talk about the future of the program.

I had discussed the idea of a capstone project with the managers and engineers working with me to put together Enova’s apprenticeship. We realized fairly early on that more than a nifty nice-to-have learning project, we needed a project with business priority, significant demonstrable value and bonafide stakeholders. Anything short of that and we risked letting our plucky program become a haloed boondoggle. We identified a project that had been prioritized at number two for a number of our product owners, a service to prioritize work for our operations folks. The apprentices ultimately delivered the project consistent with the high expectations we had set, and it’s being used in production now.

Before and especially during this project we were regularly reminded that that apprentices (and probably beginners of any sort) are painfully reluctant to use the time of more senior folks. Several times we had to intervene and reassure our apprentices that their questions and needs were as valid as any other engineer’s, and that they could and should ask. This was unsurprisingly more difficult than we would’ve hoped, and combating fear and imposter syndrome was a daily challenge.

I also had a chance to work closely with Joe Mastey, our former Manager of Internal Learning and a great friend of mine. Joe left Enova to focus on speaking, writing and consulting. We continue to collaborate occasionally, and we delivered a talk for Dev Bootcamp in early October. In fact, Joe was inspired to write up a series of interviews on apprenticeship, the latest of which you can read here.

In September we set out to do another new thing: intentionally recruit and hire apprentices. With our recent successes barely a memory, we began the process of finding the best people to pick up the banner and carry it forward. For folks not familiar with the hiring process, this takes a lot more than just dashing off job listing verbiage. You author and relentlessly edit a job description in an attempt to ensure that candidates know exactly what they’re looking at. You try to incorporate ideas about your ideal candidate, their motivations, their individual search. You try to make sure that the opportunity you’re describing is compelling enough to move them. You then need to design an interview process that helps get the information you need to evaluate candidates while adequately serving their interests in learning as much about the company and role as possible. We were also adamant that the former apprentices needed to be involved from the start which added an additional wrinkle. We had to narrow a field of more than sixty candidates down to two, all while ensuring that two members of the team in particular had a chance to evaluate every one of those candidates. And we had to do it in the space of a few weeks. While we feel exceptionally lucky to have met all the fantastic candidates we did, especially the candidates we’ve selected — more about them in a later post — we definitely feel like we worked hard for this one.

We also learned a lot about how to recruit and evaluate these folks. One of the biggest surprises, at least for me, was how close the candidates were when it came to less technical evaluations. We adapted the group interview that we use for interns to the apprentice interview process, and while internship candidates can sometimes display a bit of competitive posturing, our apprenticeship candidates engaged in true and deep collaboration across the board. While we were able to see differences in this interview, they were much less pronounced than we’ve experienced in the past. I chalk this up to our prioritization of behavioral characteristics in the early stages of the process. I think we tended to select mostly folks who worked exceptionally well with others. Regardless, I look forward to learning more with each iteration.

We’ve talked with a lot of people about our experiences at each stage of building our apprenticeship program. This includes people enthusiastic about the topic of apprenticeship, those looking to start their own program, and certainly folks inside and out who see our program as a concrete manifestation of our culture and values. Naturally we’ve spoken with the candidates for apprenticeship themselves. Of all the questions we’ve fielded in these conversations, the most common two are “What happened?” and “What’s next?” I’ve talked a lot about what happened — we learned a lot and promoted two engineers, if we’re keeping tally — but I’d like to talk about that second question, because it’s important and it’s very related to the first.

One of the things we learned is that nothing about the program is carved in stone. While structure is good, that doesn’t mean it has to be static and unchanging. With that in mind we reviewed our own experiences and sought input from others in the apprenticeship community. We’re excited about some targeted changes we’ve decided to make to the program.

We’re upping our mentor game. Previously, each apprentice had two: a buddy who was closer to their skill level, and a mentor, a more senior engineer who they could receive guidance from. We’re adding a third this time around, and each apprentice will be paired with what we’re going to call their leadership mentor. This will be someone with tenure in their role or discipline at Enova who can work with apprentices in planning and shaping the arc of their individual careers. We feel strongly that encouraging apprentices to think of their career as a long-term venture is a smart way to set them up for success during and after their apprenticeship.

In addition to explicit mentorship, our former apprentices devised a plan to proactively pair our apprentices with engineers throughout the department, something we’re tentatively calling twos at two as a kind of simple mnemonic. As previously mentioned it’s often difficult for a beginner to ask a senior engineer for their time, but by establishing a rotating schedule we confront this challenge head on and demonstrate to our apprentices in a very practical way how committed we are to ensuring that they are supported. We believe this will make it easier for them to move beyond their reluctance to advocate for themselves.

We’ve added a reading list. We’ve solicited input from inside of and outside of our department and distilled the long list of recommendations to a few key books that we feel will engage apprentices in a deeply intellectual way. I personally have put in a lot of effort to ensure that the apprentices are given the time to sit with each volume, and we will be scheduling discussions for each book with other Enova engineers and managers to try to maximize their contribution to the learning experience.

The program has been restructured to allow for apprentices to apply what they’re learning to their capstone project as they work through the curriculum. We’ll give them a few weeks of breathing room as they start the program, but once they’re settled in we’ll introduce the capstone. This will allow our apprentices to split their time between curriculum and their final project, which we believe will give them a chance to apply knowledge as they acquire it. This should reinforce the material as they work through it and increase their retention of information.

Perhaps my favorite change is the addition of a journaling activity we’re calling TIL, or “today I learned.” Each day our apprentices will spend a few minutes highlighting what they learned that day. Every Friday they’ll author a written reflection on their progress. We’ll encourage them to share it as widely as they like, but will let this be optional to facilitate honest and candid introspection.

It seems obvious that we have a lot going on and we’re very excited about this next iteration of our apprenticeship program. More than that, however, we’ve refined our vision. We set out to build a program that would grow and last. All of our ideas targeted some end result, honing in on the best program as we imagined it as our destination. It’s become apparent that best was always the target on straw man’s back and that what we’ve embraced is so much more valuable and lasting. We’ve found deeper satisfaction pursuing better as our goal, focusing us on continuous improvement and adaptation. As our industry and technology evolve, so too will we evolve. We can see the greatest strength is that we, all together from stem to stern, are learning.