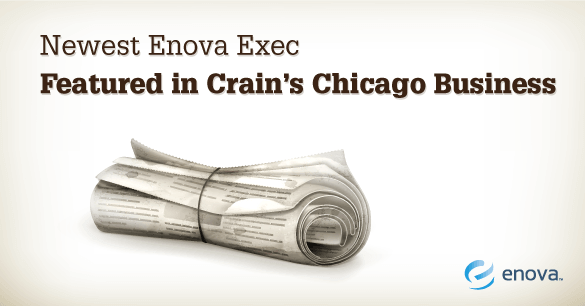 Venerable weekly business publication “Crain’s Chicago Business” gave the business world a rundown on the life and career of Enova’s new Senior Vice President and Chief Marketing Officer Kirk Chartier. The Massachusetts native joined Enova in April of this year after an impressive career leading up to the new position. At 50, Chartier has already held several executive positions since 1997.

After graduating with a bachelors degree in economics from the College of the Holy Cross, Chartier switched gears to civil engineering and urban planning, earning another bachelor’s degree from Worcester Polytechnic Institute. He then went on to earn an MBA from Syracuse University in 1996, and through it all he served in the U.S. Marine Corps in both active duty and the reserves.

He began his career as a corporate auditor for General Mills, then moved to Richard Chang Associates in California as Director of Business and Marketing Strategy Consulting before becoming VP of Online Marketing and Strategy for Answerthink in Miami. Chartier joined the leadership of CommerceQuest (now OpenText) in 2002 as Senior Vice President of Business Services and E-commerce. Then he was Senior Managing Principal for Atlanta-based Zyman Group followed by Chief Marketing Officer for OptionsExpress in Chicago before taking the helm at Enova.

Chartier’s impressive track record made him an obvious candidate for the position. Under his leadership, OptionsExpress was able to double its market share, from four percent to eight, and he increased customer awareness by 30 percent. That’s kind of my specialty, he said, winning new business by “creating rigorous, measurable marketing goals and objectives.”

Crain’s quotes Sai Koppaka, President of Analytics at Sears Holdings Corp., who worked with Chartier at OptionsExpress. “Kirk is the epitome of the next-gen marketer. While another CMO could provide lip service about analytics, Kirk lives and breathes the philosophy of data-driven decision-making.”

Enova’s new blood will use his data analysis skills to reap findings that will help streamline the company’s marketing campaigns and hone its TV and online ad campaigns. Crain’s Chicago Business’s weekly people feature is one of the most sought-after executive spotlight columns in the Chicago media market, with a readership of 201,668 and 1.2 million unique website visits every month. This is the third major piece on Enova that Crain’s has published this year.