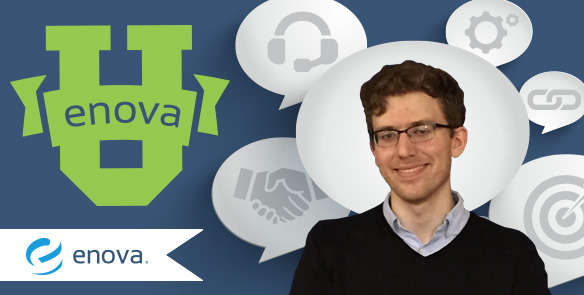 Hello! My name is Austin and I started my internship at Enova back on June 1. This will be the first in a series of blog posts from the Enova interns.

I currently attend Purdue University, studying Computer Science. I’m on track to graduate in December, then start on my M.S. in the spring (also at Purdue).

It’s already July! Everything has been moving so fast this last month. It certainly doesn’t feel like a whole month has gone by!

I’ve been really enjoying my time here at Enova! The office is located right in the heart of downtown Chicago (10 minutes walking distance from the University Center, where some of the interns are staying). I’ve never lived in a big city before. I hadn’t even taken a train before coming here. I’ve visited my sister — who lives in a nearby Chicago suburb — a couple of times, but it’s very different. There are so many events around here during the summer, and I’ve done so many things here that I haven’t done before. I’ve eaten a lot of new foods, seen a couple of concerts, been to the zoo, navy pier, etc. For anyone who hasn’t been here (or to any other major big city), the food is amazing and there’s no shortage of things to do during the summer.

As far as what we interns have been doing here, we just started on projects a few weeks ago. For the first three-ish weeks, we were all in training, learning Ruby and Rails. Some of the interns started back in May and some started in the middle of June, but we’re all catching up to each other. Most of us came in having never used Ruby or Rails.

This past week, I’ve been working on some changes to the front-end of the NetCredit website. I hadn’t done too much before with front-end development, but so far it hasn’t been an issue. There’s always someone willing to help out, and I haven’t encountered any problems with anyone looking down on interns. The interns here are doing actual projects and are treated the same as any full-time developer. We interns even have a project manager (Chetan, you’re awesome!).

I’m looking forward to learning new things and working on challenging projects with my fellow interns this summer.

P.S. To any future interns here, take advantage of all of the opportunities. Internships with this many opportunities are few and far between.