Getting to Know: SEO 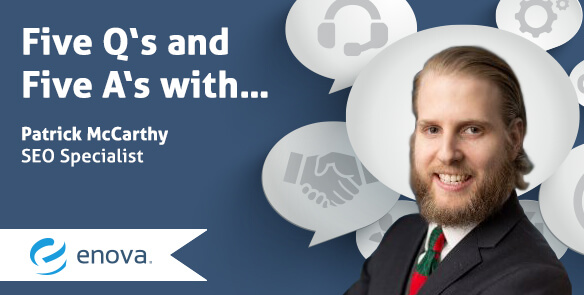 Want to know more about the folks who call Enova home? We asked SEO Specialist Patrick McCarthy our five favorite “get to know you better” questions, and here’s what he had to say:

1. How did you come to work at Enova?

Basically, Enova employee AbracaBABSra Davidson tricked me into it. We had worked together at a previous position, so she knew my weaknesses and how to exploit them. She told me that Enova was a leading meat pie manufacturer with strong ties to the Fuller’s Brewery and that Van Morrison was on the Board of Directors. I thought it was strange that everybody I interviewed with insisted on calling meat pies “loans,” but I figured it was just an institutional quirk. Long story short, I got the job and despite the total lack of meat pies (not even in the freezer!), I found the people to be pretty great so I decided to stick with it!

I do Search Engine Optimization for CashNetUSA.com, which entails making our content as user-friendly as possible, ensuring that search engines can easily understand our content, and getting other reputable sites to link to CashNetUSA.com. In practice though, I spend most of my time hiding under things (which is quite difficult considering my height) so that Arad can’t ask me about our ranking for, “Payday Loans.”

3. What’s the best part of working at Enova?

As I mentioned above, the people are so nice and talented that I sometimes get suspicious that there is something sinister going on or that the whole place is a front for a secret cabal trying to monopolize the world’s hard-boiled egg supply. Also, everybody puts up with me – an obviously insane person. Apart from the people, I’m a pretty big fan of the free food. I have mastered the art of the “Hobo Lunch” in which I use whatever foods are available in the kitchen to craft a balanced and scrumptious meal. If anyone wants a tutorial, just stop by the kitchen and say the secret code word (it’s “Swordfish”), and I’ll be happy to oblige.

4. If you could live anywhere in the world, where would it be?

A month ago, I probably would have said in the Irish countryside, but I recently returned from a trip to the Scottish Highlands and now I’m torn between the two. In the end, either would do fine (as would any other place with a paucity of people and noise and a surfeit of meat pies and crags).

5. What are your top three desert island must-haves?

1. A copy of my favorite book Tristram Shandy: An endlessly re-readable compendium of nonsense and good cheer.

2. A real nice chair: Sitting is my number one hobby and establishing a “Sit Zone” would be essential to my sanity. I mean, come on, you want me to have my sits on the ground or, heaven forbid, the beach? Yuck!

3. A few pairs of proper linen trousers: Just because I will be alone doesn’t mean that I won’t want to stay cool while still looking classy. Plus, I’ll want to impress the local animal overlords, and word on the street is that island beasts respect good linen.