Getting to Know our Apprentices - Enova International, Inc.

Getting to Know our Apprentices 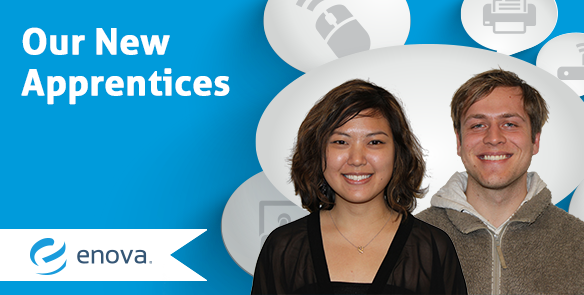 In a previous post we told you about the changes we’ve made to our apprenticeship program. In a neat turn of events we have an intersection in two series of posts. We’re excited to share with you what is both the next post in both our Getting to Know Enova series as well as the second post in our series on Apprenticeship. More than that, however, we’re excited to introduce you to two extraordinary folks who’ve just joined us as apprentices, Chris & Alexandra.

How did you come to work at Enova?

I’d just finished the Dev Bootcamp program in Chicago and was beginning to search for jobs when I attended a Built in Brews meetup held at Enova early this fall. I was interested in Enova’s apprenticeship program, but Lizzie, a recruiter at Enova, told me that the company had just filled its available slots. Despite the unfortunate news, Lizzie and the rest of the Enova team were amazing hosts, and I sent her a note to thank her for the great event. When she contacted me again a few weeks later letting me know that an apprenticeship slot had opened up, I was thrilled. A thoughtful, in-depth interview process with several engineers easily convinced me that the people at Enova were the people I wanted to work with.

What do you do at Enova?

Along with Alexandra, I’m a Software Engineer Apprentice. Enova has had apprentices before and incorporated their feedback into how our time is structured here. One example is that as an apprentice, I pair with a more experienced engineer for an hour every day, which is amazing. I’m currently working through the 4 – 6 week, work-at-your-own-pace LevelUp course, which includes sections on Linux, Ruby, Rails, Interaction Design and Test Engineering. Alexandra and I will receive a project in a few more weeks that we’ll work together on for the duration of our 6-month apprenticeship.

The people. The fact that I’ve just started here but can already think of a ton of people to thank says a lot. Every engineer I’ve met at Enova has been so willing to share his/her time and knowledge with me.

I consider Richard, who is my ”technical mentor,” to be a role model in terms of the curiosity and rigor with which he approaches coding and learning. Stacy, a previous Enova apprentice and my assigned buddy, has been helping me with technical questions and generally acclimating to a software environment (this is my first software job). Dan S., Jordan, Ian, Jill and Costi generously share time with me so that I can go 1-on-1 for an hour each day with an experienced engineer. The structure and attention provided by Blake and Dan K. are making the apprenticeship experience excellent. My fellow apprentice Alexandra has a great attitude, and I like being able to work with her as a peer so we can learn simultaneously. And there are many other Enova team members who’ve offered their time, expertise and friendliness informally. It’s been a really welcoming learning environment.

As of right now, I’d want to split time among a major US city, a major European city and somewhere quieter with seasons, mountains and skiing.

A giant library, a computer with endless samples/synths/music software and a notebook. Although if I were washed up from a shipwreck or something I guess my priorities would be more in line with food, water and a ton of Legos to build a shelter.

How did you come to work at Enova?

I went to a Meetup here hosted by Enova and there was an announcement at the end about signing up for something on the iPad. I didn’t know what that was for so I asked, signed up and got an e-mail from Enova referring me to the careers section and asking whether I would be interested in a position. I expressed my interest in Software Engineering but specifically asked whether an apprenticeship was available. To my pleasant surprise, Enova already had an apprenticeship program in place and although it wasn’t advertised or open to the public at the time, I was fortunate enough to ask in providence and graced enough to be replied to in-kind. That said, I sent all my information over, one conversation led to another, and I am happy to say I am now humbly part of the second cohort of apprentices.

What do you do at Enova?

Apart from being able to geek out with fellow Enova teammates and participate in ever-increasing stimulating discussion, I have the privilege to be immersed in all things software engineering. This means going through exercises, reading materials, talking shop, asking questions, observing and getting feedback. I am honored to be able to pair program with some of the other software engineers here, be a part of the women in tech culture and have mentors that challenge me to grow and thrive professionally.

The people and its culture.

To the former, everyone I have met thus far, regardless of department or seniority, has been incredibly kind, willing to offer help and knowledge and has basically made me feel right at home.

To the latter, I find Enova to be unique; not just in its organizational structure and dexterity but also in its environment of learning. The core values Enova upholds speaks volumes to this and relays a strong emphasis on education and the importance of investing in it; and working and building as a collaborative team.

To that end, I am grateful to have the opportunity to be exposed to, engage with and be educated by other engineers on a technical and holistic level.

Kent Beck once said, “When you’re the senior in junior/senior pair programming, the measure of your success is how much the junior learns.” I really believe and see how Enova strives for and welcomes this, and I’m thankful to be part of it.

I can’t really see myself living outside of Chicago at this point in time. But if I were to take a small hiatus I might want to try the Maldives for a bit or somewhere either completely unexplored or not often visited — be it a jungle, snow-capped mountain or island. London and Europe also sound nice.

If I’m trying to get off the island then I only need one: a jet or helicopter that will get me off it, or better yet, a Tardis. If I’m stuck on the island then I’d likely go with a knife, some good quality paracord and an industrial water purifier/pump.

But really, what would I do without the Internet? 🙂