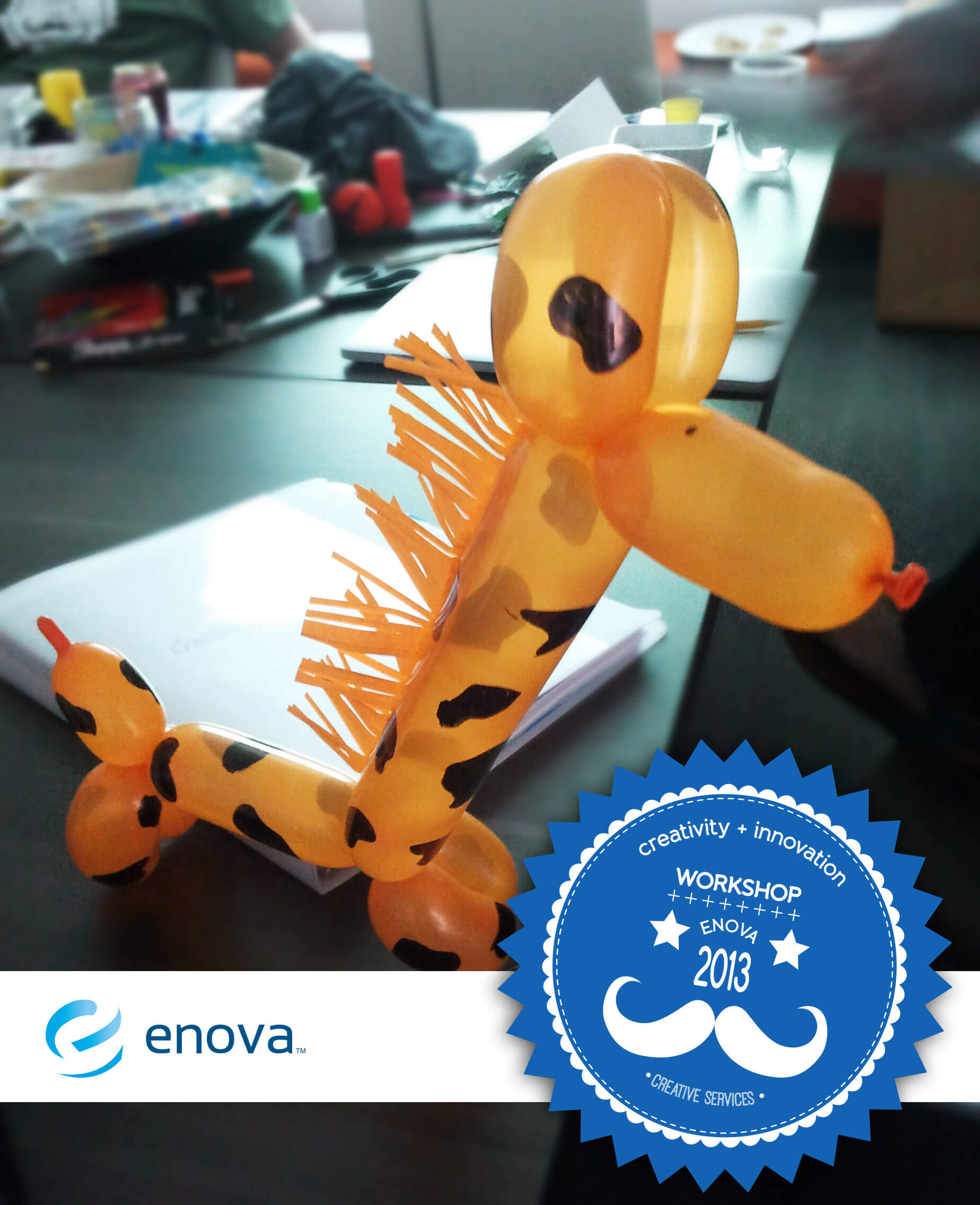 One Thursday in early August, Enova’s Creative Marketing team took a day away from the office to unwind, recharge and remind themselves how to be
creative.

Instead of heading to Enova’s corporate offices on Jackson Boulevard, team members filed in to an unfamiliar space on Monroe Street for a daylong workshop on creativity and innovation. Awaiting them was a schedule of activities and exercises designed to get their creative juices flowing. Also awaiting them was an abundance of Play-Doh®, squishy balls, balloons and markers that team members were encouraged to play with throughout the day.

During the morning session, team members were asked to create a new name and identity for themselves.They were then presented with a series of paradigm-challenging facts about creativity and a lesson on the brain’s two hemispheres. Later on, the team examined common creativity-draining excuses and participated in activities designed to heighten the creativity of their problem-solving skills. The workshop was capped off by the awarding of various techy gadgets and a cash prize — based, of course, on creativity.

At Enova, the Creative Marketing team is charged with improving the customer experience and delivering creative, high-quality copy and graphic design for use by the company’s business units. Some of the team’s most frequent projects include the creation of Web pages, email campaigns, advertisements and blog content.

The team has already seen several important benefits from the workshop. Based on the fruitful dialogue conducted there, the team now engages in a “creative scrum” every Monday, Wednesday and Friday, where team members post ongoing projects for critique and discussion. The team has also begun once-a-month “bugfests,” blocking off a half day to complete small, one-off tasks that have accumulated. A third positive development has been a more upfront collaboration with Enova’s business units, bringing everyone onto the same page from the start of each project.

Members of the Creative Marketing team seemed appreciative of the opportunity to attend the creativity and innovation workshop.

“I could have done without the toys,” said Joey Salvador, senior designer of five years. “But it was nice to step away from our daily routine and remember that what we’re really tasked with is finding creative ways to further Enova’s business.

“Even though the workshop was fun,” he went on to say, “there are proven methodologies behind what we did. Creativity isn’t just about being silly — these are techniques to get the best return from your creative effort.”

The rest of the Creative Marketing team was inclined to agree.