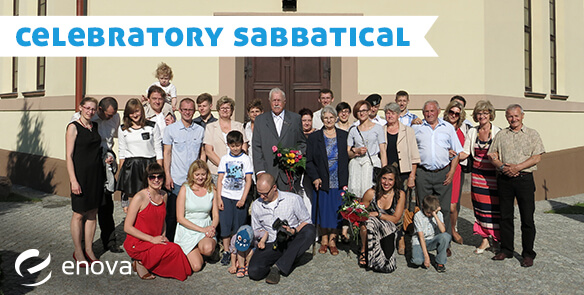 Continuing our Enova Sabbatical series this week is Joanna Burgraf, Production Team Lead. Joanna has been with Enova for over eight years and spent her well-deserved sabbatical with her family for a very special occasion.

What do you do when your basket-weaving you tube sensation, decorated World War II veteran of a Grandfather turns 90 and you have a four week sabbatical? Fly to Poland for a party with 40 of your closest relatives, of course.

The majority of my family lives in Poland, so when it came time to celebrate my grandfather’s 90th year, I convinced my mom to take a two week trip to her home country. The majority of her family live in northeastern Poland in a region called Mazury.

Growing up, I would visit my family overseas every other summer. As I got older and as our family grew, it became increasingly difficult to see everyone on these trips. While the majority of my family members live in Poland, a handful live in the U.S. and Germany. All but six of 42 were in attendance for this milestone occasion.

While we didn’t keep the fact that there would be a celebration from my grandfather, he had no idea what he was in store for. He was expecting a larger dinner, with maybe 10 people at my aunt’s house. Instead we started the day with a 5 p.m. mass dedicated to him at the local church. My aunt called in a special favor to have the organist come in on a Saturday. In a small rural village church (population: 510) that’s a big deal.

After the mass we chauffeured him to a lakeside resort where we rented the largest room in the area for a dinner party. All 36 of us sat at one long table. Throughout the night he could barely keep from tearing up. We had a five-course family style dinner and bottles of vodka on the table where we took turn taking shots with him. My cousin Ania, an artist, designed and produced a family currency called “Gajlewiak” and presented it to my grandfather as a gift. Everyone in attendance also received a coin as a memento of our time together. There was of course a huge cake. The celebrations continued with fireside singing, eating and drinking well into the night.

It’s a rare thing to celebrate a 90th birthday. I feel lucky to have had the time and the opportunity to take this trip for such a special occasion. Thank you Enova for such a fantastic perk!