Designing in the Age of the Stock Meme - Enova International, Inc.

Designing in the Age of the Stock Meme 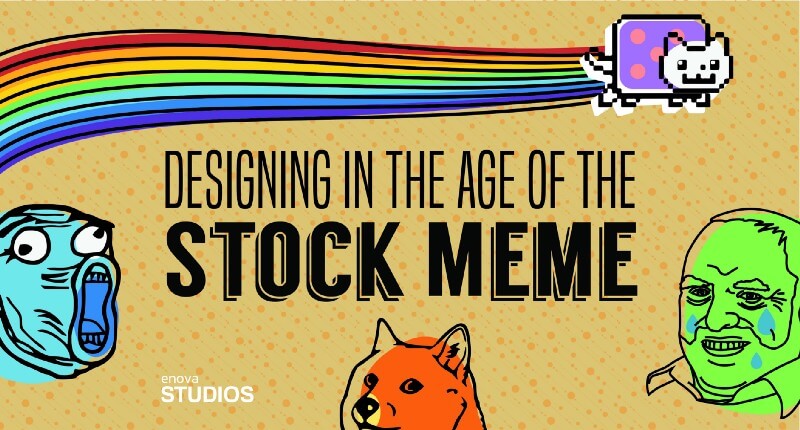 Here in Enova Studios we use a lot of stock imagery. As many designers know it’s a valuable resource to design quickly and more creatively. There’s no need to hire a photographer and custom shoot every image on your site. Sure, for the homepage and major marketing materials it can be worth it to shoot your own stuff and we do that here at Enova Studios too –but a tertiary SEO page may not need a custom shot “woman managing her finances”. That’s where the vast world of stock photography comes in. With a few clicks you’ve got an on-brand image that communicates exactly what you were thinking.

Of course when you use stock imagery you do so with the understanding that you don’t have an exclusive license to use the that image; anyone can download it and include it in their marketing too. It can be fun as a designer to walk down the street and recognize a photo on a lamppost banner that you used the other day for a landing page, or more concerning there’s the time that you go to one of your competitor’s site and see the same woman you used in your email campaign right there on the homepage. That might be a little confusing to customers shopping around and you’ll probably want to find some more unique imagery.

Those are the realities of stock imagery that designers have long dealt with. But now what happens when you start to see the same imagery you’ve been using pop on Facebook, Reddit, Instagram and the like in the form of memes? It turns out that the sweet old man you had in a blog post is internet famous for shielding the inner angst of the modern world; cue “Hide The Pain Harold”. Your blog post image may now take on a slightly more somber tone by association; if a deep gaze into András Arató’s eyes didn’t do that for you already.

It’s not all political subversion in the world of the meme though. Plenty of the memes on the internet are much fun. From Shiba Inus to SpongeBob, the majority of memes are really not much more than jokes. If you’re looking to be topical, especially if you’re designing for social media, building off memes can be a fun way to make your brand more current. Just be wary though; if you’re going to try and play it cool you better make sure you stay on trend. Posting memes that have already jumped the shark will probably date your brand more than not posting at all.

The culture of the internet is moving faster than ever and with the democratization of content creation stock images and other media is getting used by the masses to represent a punchline, movement, or a snapshot of the current culture. As a designer you need to make sure you keep an eye on the current memes and pick your stock imagery accordingly.

❮ Giving Back: Bowl for Kids’ Sake 2018
Collaborating (and Coloring) Outside the Lines ❯