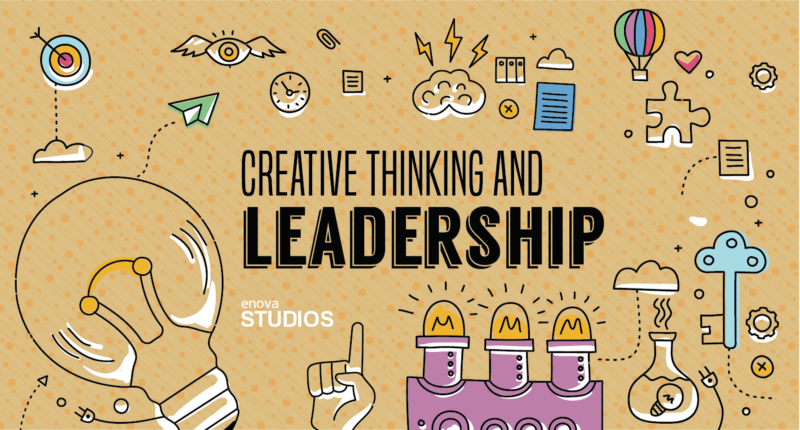 What is leadership? If we were playing Mad Libs, the prompt “leaders _____” would result in answers like “act decisively,” “show confidence,” “are honest.” Effective leaders certainly do and should embody all of those qualities, but there is one word infrequently applied that is absolutely essential in successful leaders: creativity.

So why is creativity such an important part of leadership? Think about two critical roles a leader plays in any organization: rallying people together and problem solver. There is no blueprint for either, no step-by-step guide. Both require someone to look at each situation and fashion something unique that will help the team deliver on its goals.

The Power of Storytelling

There are precious few teams or groups where people lack choice of whether or not they join in. People can leave companies, they can opt out of social groups. They may also sit on the sidelines, neither helping nor hindering. So what makes people commit? What makes a team unify? What separates strong performing teams from those who merely go through the motions?

At our core, we humans are motivated by stories — it is the thing that stirs us to action, to band together to achieve a common goal. That’s because stories evoke emotion and forge a bond between the storyteller and the audience.

Great leaders are also great storytellers, people who use language to show the destination and illuminate the goals. When Steve Jobs introduced the Macintosh, he framed it as a liberation of technology from the computing colossus that was IBM. He wove a story around the history of the personal computer from the early work at Xerox through the Macintosh to a story of good v. evil (with some allusions to 1984 thrown in). For Apple employees, Macintosh wasn’t just a new product, it was a mission. Everyone from the person writing some part of the software to the marketing person designing the box was integral to that mission.

At Enova, our mission is “to help hardworking people get access to fast, trustworthy credit.” How we bring that home to our team is through customer stories — actual experiences from our products have benefited people and small businesses. It’s a great celebration of what we do, but it is a reminder of why we do it. It helps our team rally around that mission and keep delivering great products for our customers.

They Tell Me There Are No Problems, Only Solutions

Einstein famously said, “We cannot solve our problems with the same thinking we used when we created them.” Every team no matter what size will face challenges. Some of those are small like picking the right software tools. Some are massive, such as pioneering a completely new way of doing business. Leaders face these situations continually, and while they don’t need to be the sole provider of solutions, they do need to ensure that new ideas and new perspectives are applied to those problems.

Organizations that struggle with problem-solving usually do so because they lack imagination — they assume that the answer today is the same answer as yesterday. The history of business is littered with failed companies who assumed the world would never change. The answer to the question “it’s too far to travel to rent a movie” wasn’t answered ultimately with more video stores but with video streaming over the Internet to every home. The problem of covering long distances was not about making a faster horse but about figuring out how to fly. It’s these leaps in thinking that make organizations successful over time.

One of the exercises I like to do with teams is something called the Tennis Ball Game. You make a circle of 5–6 people and tell them to pass the tennis ball between them once and they will be timed. The rules are simple: everyone must touch the ball once, in order, until it is the hand of the person who started with it. After each round, the team is told to cut their time in half. In the beginning, they just pass or throw the ball faster. Then, they get closer. Eventually, teams figure out how to do things like have the first person hold it and each team member removes a finger in order. The times go from 30 seconds to 1 second but each time they are told “cut it in half” they have to figure out a new way. It teaches them that most problems that seem impossible are in fact solvable; and that they need to think differently to solve them.

Enova is a company built on solutions that didn’t exist before. The company was one of the first to build a wholly digital lending experience conducted in real-time — never meeting customers in person as they would in a traditional bank or other lender. To do that, we had to figure out how to build an online loan application that was easy to understand and use. We had to develop a way to assess the creditworthiness — and identity — of people we would never meet in person. And that imagination, that innovation drives us as consumer expectations change and as our company industry evolves. What worked as a small company won’t serve us well as a billion dollar company. It’s a challenge we meet every day, creatively.

The next time you think about building leadership, remember: it might just be the poet, the artist, the filmmaker who has the right stuff.