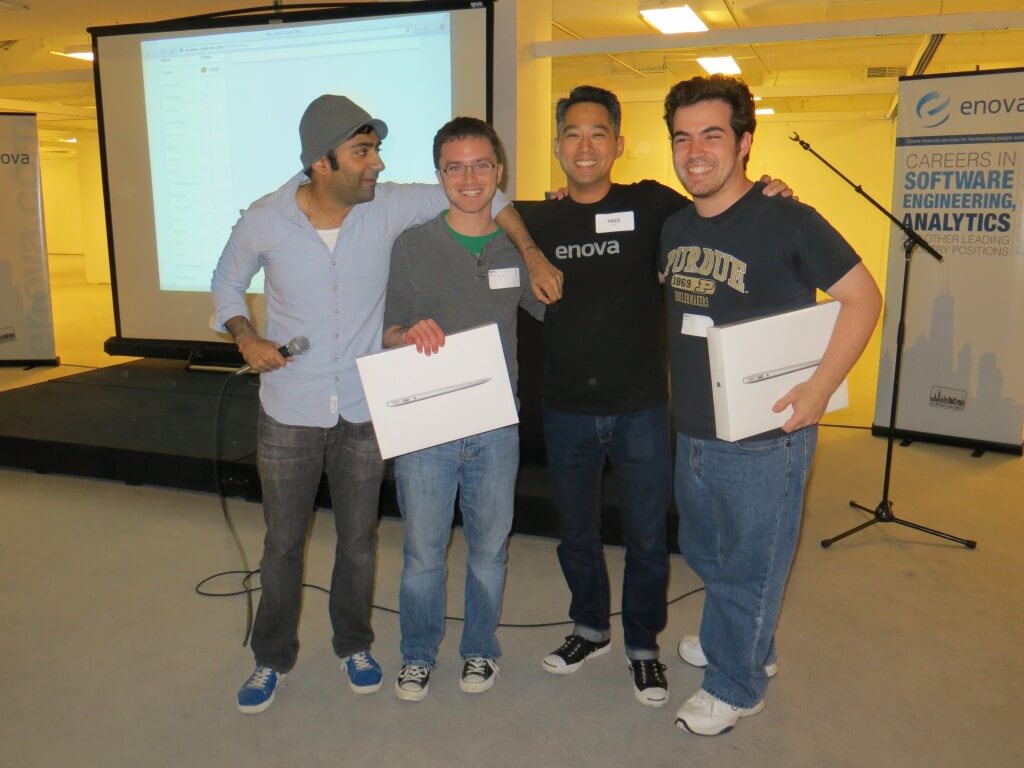 In the aftermath of our latest “Hackathon,” we wanted to shine the spotlight on the winning team. In addition to bragging rights, the first place winners each took home a brand new MacBook Air. Keep reading to learn more about our winning team and their experience at Enova’s No Limit Code ‘Em!

I am a Masters in Computer Science student at Purdue University. I also received my BS in CS at Purdue in May 2012. I’ve been focusing my Masters studies in the area of Machine learning. In past summers, I completed internships at State Farm, Qualcomm, Microsoft, and Texas Instruments. In my free time I also work on various side projects, including my own Machine Learning library, JSAT.

I had a lot of fun at the “Hackathon!” Many competitions are either ACM style, where you have to know a math trick to get the solution, or you’re given a spec and test cases that you have to implement. The ACM ones aren’t much fun, because it’s more a race between people who have memorized the tricks from previous competitions. The test case ones are better, but there usually isn’t a lot of room for creativity.

The Enova competition was much more fun though. While I felt a little disadvantaged since I had never played poker, the lack of an explicit target to meet made it much more interesting. Yes, we had to communicate with the server to play, but the rest of it was just “Who can create the best bot?” It felt much more like an intellectual competition than just a race. There were elements of stats, AI, and game theory all contained in how to make a poker bot. I remember at one point Rick and I had to decide if we would try to make our bot bluff, and how would we tell if someone else was bluffing? In the end we went with a more statistical approach, and just assumed no one would bluff us. Watching the final tournament rounds was amazingly fun, and nerve racking at the same time. I wish more competitions were done in this style!

I am from Indianapolis, IN. I am currently finishing up my bachelors degree in computer science from Purdue University in West Lafayette, IN.

The “hackathon” was a great experience for me. I had never participated in anything quite like it before. It was very competitive and exciting. I am a mediocre poker player at best, and Edward had never actually played. This meant we had to focus much more on the math than any pre-existing experience in poker strategy. We actually didn’t have our strategy figured out until the very end, so we were just as surprised that we started winning as everyone else. It made for a very stressful, but ultimately very satisfying evening. This was by far the most fun I have had at a programming competition.