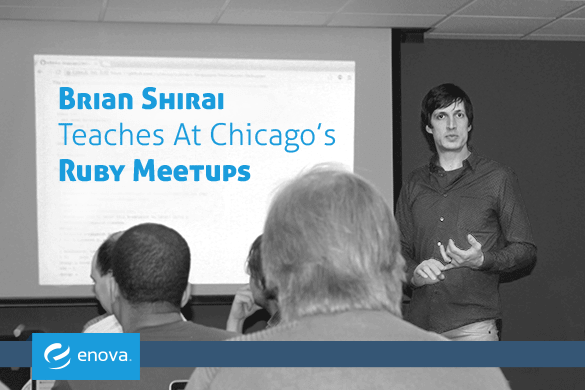 When Brian Shirai joined Enova, he knew that Chicago was a central location for many developers who code using Ruby. With the ChicagoRuby group, Brian saw an opportunity to take his work with Ruby outside the confines of Enova, and engage with a variety of different programmers and developers, all interested in the future of Ruby. On March 4 at ThoughtWorks, and again March 12 at the Enova offices, Brian addressed large groups of new and old Ruby users, discussing custom languages in Rubinius, and leading the group in some Rubinius coding.

“The first night was about Ruby and different programming languages,” says Brian. “Different problems often require different languages, and understanding how to use those languages side by side with Ruby can be really useful. Night two just gave everybody an opportunity to implement some of the stuff we talked about on night one. We broke people into groups and just let them run with what they had learned. I think it was helpful to a lot of people.”

The Ruby Meetups — or “Hack Nights,” as they’re known — have been a part of the Chicago tech landscape for years, with Enova often playing host. According to meetup organizer Ray Hightower, “Enova built one of the first Ruby on Rails apps in the world. CTO Fred Lee and Brian Shirai blend technical vision with Ruby community leadership. ChicagoRuby is grateful for Enova’s ongoing support.”