Adapting an Internship Program to a Virtual World 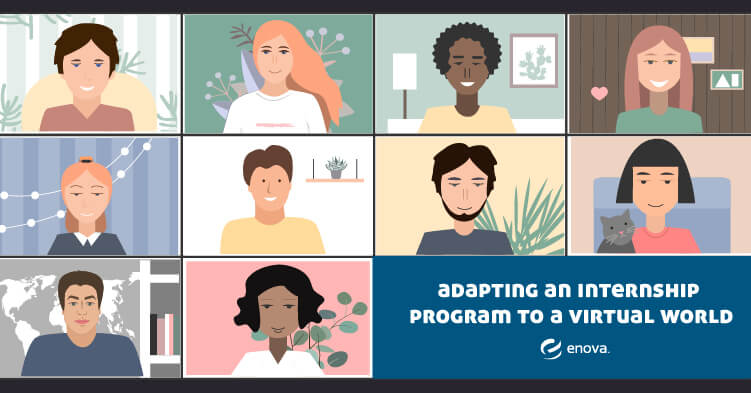 There were a few buckets we could check off right away. It was obvious we still had projects and work available that would be interesting to the interns, and would give them a chance to apply and build on the technical skills they’ve learned in school. It was also clear we had full-time team members interested in managing interns. At the start of the pandemic, there was a rush on laptops as companies anticipating a shortage worked to secure hardware (laptops were basically the toilet paper of the business world), and we weren’t able to get enough machines to provide interns with the typical Enova-issued equipment. Thankfully, much of our technology is open-source or available over AWS so we were able to get interns up and running on their personal machines if we could get them access to our VPN, which we could.

We had a number of interns who planned to relocate to Chicago. While Chicago is typically an amazing place to spend a summer, we didn’t want them to take unnecessary health risks and move if it was unlikely we would return to the office over the course of the internship. Relocation and housing expenses were also a significant portion of the internship budget. If we opted to keep the internship fully remote, even in the off-chance we were able to return to office, we could save money and logistically make things easier for the interns. No one wants to apartment hunt or move during a pandemic!

The biggest question mark around a remote internship was whether or not we would be able to share our company culture. After a number of brainstorming sessions, we came up with a plan. We could partner with our Talent team to adapt our normal Day One Onboarding so it would work remote. We could also set communication guidelines for intern managers (daily 10-15 minute non-work focused team check-ins in addition to longer regular weekly one-on-ones for more in-depth project guidance and feedback) to ensure the intern would acclimate to the team. Normally, due to different school schedules, we have various start and end dates across a cohort but realized that would be unwieldy this summer and difficult to manage. We compared school calendars and found eight weeks where all the interns would be available. Having everyone start and end on the same day would make it easier to create a sense of cohesion amongst the cohort because they would all be going through the internship together. Yes, the overall experience would be shorter than the normal 10-12 weeks, but we could select projects that could be completed in that eight week window. We also believed that would be enough time on our end to evaluate performance.

When we’re in the office, our interns are able to participate in office-wide events, like our annual Cubs outing, and intern-specific offsites, like kayaking on the Chicago River. The pandemic and remote work meant those options weren’t possible this year but we believed a sense of cohesion within the cohort would be more important than ever and casual get-togethers are one of the best ways to develop that. We brainstormed a concept called ‘Intern Bonfires’— a weekly gathering of all the interns, each with a different focus. Some would be business focused (like having executives join for a Q & A) and some would be pure fun and a chance to unwind (like playing trivia or having a professional tour guide show them around Chicago virtually). These Bonfires would give interns across different departments the chance to get to know each other and form connections.

Once we developed a plan that seemed to check all the boxes  we received the go-ahead to move forward with the internship! Recruiters hurried to convey the updated details to the interns and determine if they were still interested given the changes. We knew we were changing a lot — the overall internship structure, the location, the length, and the overall compensation —  we also knew it was different than what they signed up originally. We let them know we understood if they opted out of the internship and we’d still happily consider them for full-time roles after graduation. While the majority of interns were still excited to join us for the summer, we did have three interns opt out as a result of the pandemic —  two prior to announcing the changes and one after. This landed us with 13 total interns who would be joining us virtually for the summer.

Our internship wrapped up in early August and largely went off without a hitch. We did run into some technical issues with the interns using personal machines since some of their computers weren’t as modern as an Enova-issued machine. There were also some business-focused informational sessions we would have liked to offer, but weren’t able to, given the shortened timeframe and need to ensure the interns had the necessary time to complete their projects. We were very fortunate to have a great group of interns who were not only adaptable, resourceful and eager to learn, but also took initiative when it came to asking questions and forming bonds with each other and Team Enova. We also selected the right intern managers. The managers were instrumental in the success of this program and their willingness to spend time and energy ensuring interns had the necessary support while also facilitating connections within the department and company was critical and a major reason why the internship was successful.

You can learn more about all of our 2020 interns and their projects on our Enova U website.